When the Sidewalk is Art 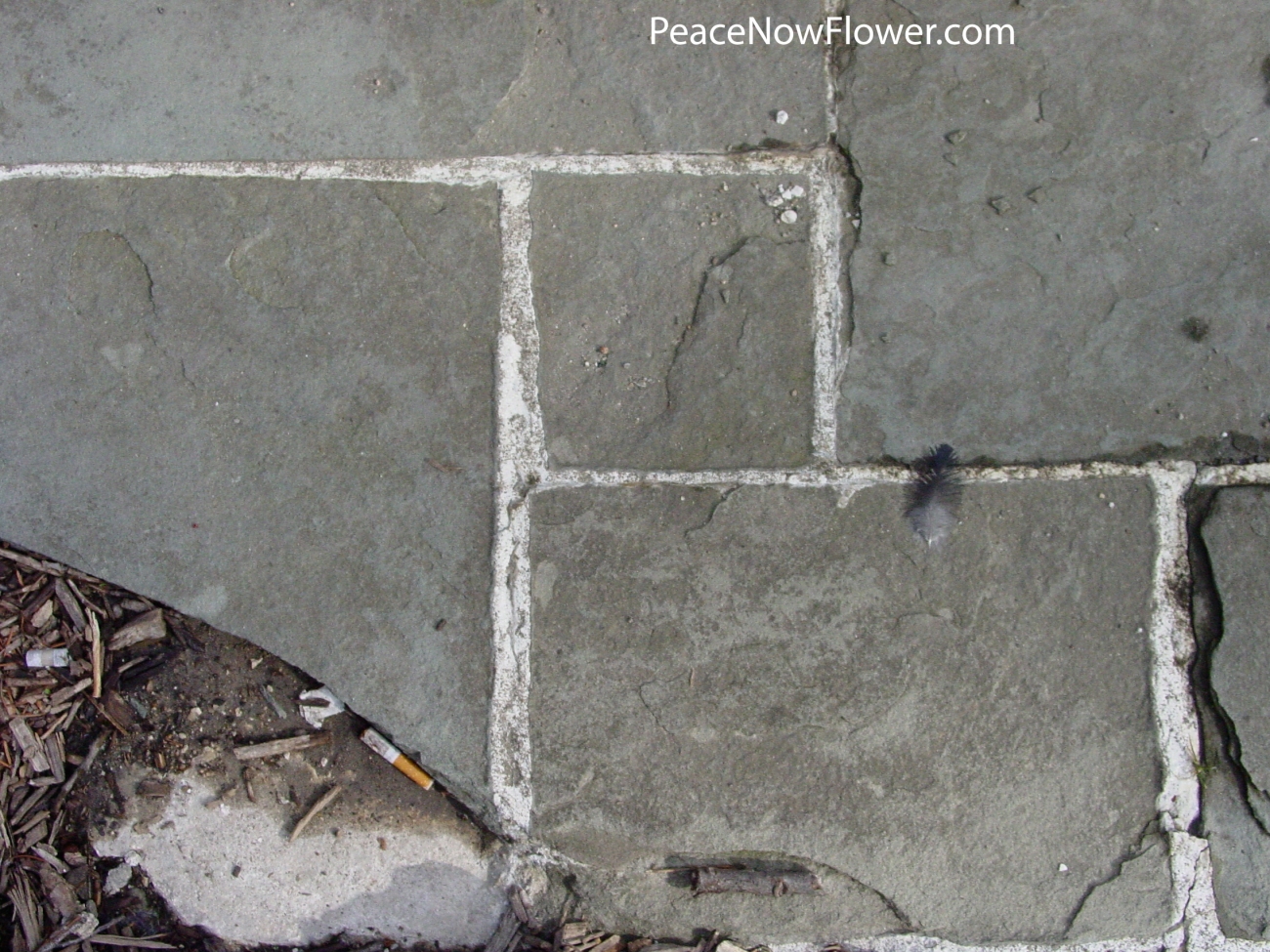 It is fascinating the little things I used to take pictures of so many years ago. Now that it is so much easier to carry a camera, I tend to overlook what I would have once considered picture worthy.

I lack the same drive I had in my youth, before years of depression and illness. Now I am much more in the moment, yet feel no need to record the moment.

Art is no longer the end all be all of my life. Art is something I take for granted as a fact of life. Now I am much more into listening to Spiritual sources for stabilization of my emotions.

I went through a long path to get to where I am. The years where I slept 16 hours every day, I had given up on life at that point. I was living each day waiting to naturally die. The focus was not on stabilizing anything. It was a struggle to muster up enough energy to do anything beyond watch Music Videos and making up stories for the videos in my mind.

Seating in my chair watching Music Videos was an improvement over the times when all I could do was fill out Sweepstakes… one after another.

I still remember that first book I read during my depression, and how I got to the end of the first page and realized that I had understood nothing. I struggled to hold the meaning of one sentence along in my mind long enough to really know what I was reading. Yet, I read that book. Ender’s Game.

In my depression, the boredom was so extreme that I tried many methods to fill the time. I would go to the park and walk for hours. I would count the minutes all day waiting for the time I considered my walking time, often heading out early because I could wait no more. I read more books that Summer than in any other Summer of my Life. I visited the library often. The understanding of what I was reading slowly became easier.

I have never been quite the same person as I was before the illness. The person who found so many photographs to take of little things like the square brick making up part of the sidewalk. How many people have walked over that spot and how many have noted its potential as Art?

I was driven at that time, to somehow make it in the world. I saw Art around me, and I stressed the little details.

Me then and me now. A knight who was knocked off her horse and took years to even consider riding a horse again. The Battleground is now in a different place where I would have to search to find it again. A knight who now wonders about the pursuit of Battle at all.

I was originally part of the pack. Fighting the competition in a respected University. Yet, when illness made motivation hard, the best I could do was finish my courses. The opportunity to discover me in college was turned to the focus of just surviving in college. Instead of getting internships to build up a resume. I was left in the dust as the battle carried on without me.

If you think I sound smart now, imagine who I was before I had to fight through the dulled thinking my medication gave me.

Yet, I have matured where my pursuits are different to the point that even if I got back up on my horse, I wouldn’t likely be riding to join the pack.

A part of me mourns. The opportunities missed. The smart thinking I once had. Building back up to this level of intelligence has been hard enough.

Someday, a medical doctor will tell me that it is now safe to be unmedicated. There will be no need to place a computer in my mind to monitor chemicals in order to do so.

I personally believe that I am well enough that I could survive without medication after a very slow tapering off. I believe that my thyroid was the problem and when that issue was discovered my illness was fixed. Yet, a part of my wish is to have a medical doctor first assure me it is safe.

Mark my words, someday, I will be allowed to return to the full intelligence of my mind. This dull feeling will be gone. And this time, I will have the maturity to handle it.

This illness is not meant to last a lifetime.

Two things are going to happen. First, the medical profession is going to open its mind to the full range of natural human experiences. Second, the will understand the brain well enough to be able to return those out of balance to balance.

It is not going to happen in any other order. The scientists will not be able to understand the human brain without first opening its mind to more esoteric aspects of the human self. Why? Because, otherwise, they would use their incomplete view of the human experience to medicate the humanness out of humanity.

Should the focus of medical professions really be to increase the number of patients? No, their focus should be on understanding the full range of human experience well enough that they can help a person Mature.

I have received more balancing of emotions from Matt Kahn or Kryon than any medication or therapist ever accomplished. The medication mainly just made it harder to think. While the unbalanced thyroid stole my energy so I felt I was depressed. Therapists mainly just listened to me talk. The same sort of thing I can get done by writing.

The medical profession needs to study how Matt Kahn takes people’s problems, without needing to medicate them, and helps them understand balance. They need to study how Bashar gets to people’s negative definitions and redefines new definitions that are in balance.

Umm… this post did not go the direction I had intended. I ended up writing about Mental and Emotional Health again.

Mark my words (me reading this in the future), a medical doctor will someday tell you it is safe to be unmedicated. This dullness will be gone.