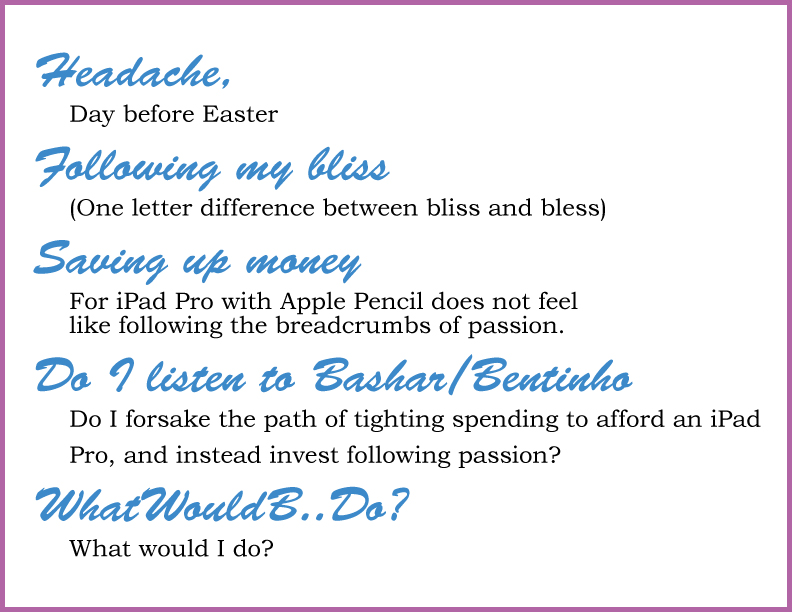 After my short adventure getting food, and milk/apples Downtown. I settled home, and wanted to sleep. My head felt stuffy, and like I might be coming down with something (this happens to me when I’ve had too little fruit for a while). After a small cup of milk, and an apple, I decided sleep was the best choice.

So I laid down for an hour, yet, remember that caffeine I had at noon, yep. I was tired and the caffeine was still effecting my ability to sleep. So I went to choice two. As I had a small headache, I realized that ibuprofen would help. It took about 15 mins to come into full effect, but with the headache gone, so was my sleepiness. This was expected, as it has happened before.

So here I am, kind of tired, but not as tired. I was able to focus on Bashar finally, and watched the video I bought on Allowance. It was cool. I find it interesting when different channelers make the same metaphors. In one of Matt Kahn’s Angel Academy’s (I think it was an Angel Academy) he talked about letting the inner child think it is driving, but also that the Universe lets us think we are driving, when the wheel is not hooked up to anything. (It is one of those toy wheels.) Well, in this channeling Bashar made the same statement. Yet, this isn’t the only time my different teachers have been in alignment.

Bashar and Bentinho Massaro, have some similar ‘follow your bliss’ teachings. So usually if I am reminded of another teaching when listening to Bashar it is Bentinho’s. If Bashar were not so expensive, I would gladly be watching many of his teachings right now. I see now why Bentinho set up his Trinfinity Academy, for a monthly price. I wish Bashar had some system set up where you pay a set price per month to get unlimited access, or that he had certain core videos Highlighted as most important.

As it is, I have a long list of Channeled videos on his site for a $24-$34 price each, and no idea which ones to invest in. I’d like to get an understanding of his teachings somehow, but it will take a long time. As I don’t intend to invest in anything more this month (the month is almost up), and my pride is hurt by surfing Youtube for short clips, I will have to gain a slow understanding.

Sorry, you will not have noticed, but my focus shifted. I was seating here thinking of personal issues, and how much I’d love to have advice on them. So I did get the session with Jennifer for $50. It is such a turning point in my life.

Yet, even with going to get some few groceries, food, and the session, I still haven’t given up on saving money. Part of me just doesn’t understand how I will save up money if I spend money. I enter sweepstakes that could win me an iPad Pro, but I have entered so many without winning that the process of entering was more for the fun then me actually thinking I will win.

Sometimes I will enter a sweepstakes, and start talking to people about what I will do if I win. Such as there was a sweepstakes where you could win two iPhones, and I didn’t know who I would give the second one too. I was told to only worry about that if I win.

Another case is when I enter to win a house, and don’t know how I would pay the taxes for winning a house if I won. I do online research on what the taxes will be, and then there is the yearly tax for owning a house at all.

It is almost a good thing, that I never won any of those luxury cruises. As the tax on winning would be high. Also when I was first into entering sweepstakes, I entered so many different kinds for useless things. Like really expensive Jewelry. If I had won, I would have had to sell the Jewelry to pay for the tax.

I just wasn’t realizing that the price of the item I won would have been entered in taxes as Income tax. Thank goodness I figured things out before I won anything big. Now I enter sweepstakes more responsibly, and less things I would likely never use.

The only way to get an iPad pro without saving money which makes any sense to me, is to increase income. The food co-op is hiring. I could have been writing a cover letter about now, but that didn’t feel like following my bliss at the moment. For I had a desire to Blog.

When the moment feels right, I will be writing that cover letter. Perhaps when it isn’t already very late, and me tired without being able to sleep. Once I get started I can usually start thinking of what to write, before I start, I only have a vague notion. I am not one to plan out writing, but instead to just start writing.

Happy Easter! Where I am it is past midnight, so Easter. Don’t know what tomorrow will bring me.