Living on Nervous Energy vs Living on Passion 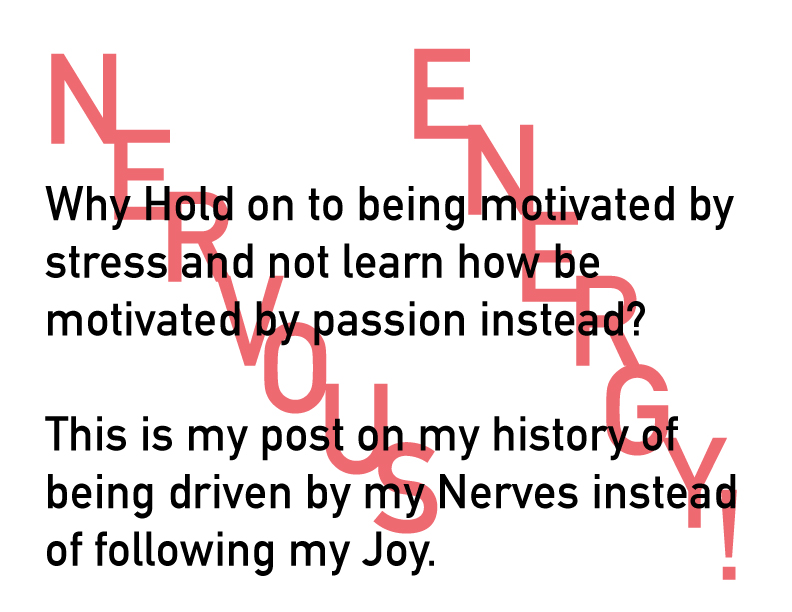 I was a different person in the past. Today I am going to talk about the far past. Around the time High School was ending, and all throughout college, I was driven by nervous energy. I stressed about my assignments, and I didn’t come to the realization that I am being motivated many by my nerves until I was put on an Anti-anxiety medication. I had to be taken off the medication because without anxiety I lot all motivation.

In a way, I needed that long break between college, and finding a job. If I had found one right away, I wouldn’t have known how without stress as the driving force. Ending college was another stressful time for me. A part of me seriously wanted to just become Homeless. To not have to continue in this system of stress.

My family took me in, as I was ill in that I was sleeping 16 hours a day. I spent my waking hours watching the same music video repetitively. Making stories for the videos up in my head. I still vaguely remember the stories when I think of the videos. I had a dream where I remembered the childhood world I had created, and I took up daydreaming about it again.

At times the story came easily, and at other times it was a struggle to think of anything. Time was moving so quickly at that point. Around the time I decided to try for Disability I moved away from my childhood home to another city. For a great deal of time before my Disability was approved, all I had to my name was about $50.

I volunteered at first as an unpaid Nanny. I managed to get hired in at Godiva. Then I found another part time job at a library shelving books. When I started working at the library enough, I left Godiva. It hadn’t been the best work environment. One of the employee’s never talked to me, and we just stood in silence the whole time until a customer came in.

I was still a little anxiety filled at work. I’d compare myself to others, and think I was working too slow. Never was I talked to. I still was recovering from the time I was sleeping 16 hours. Yet, that anxiety disappeared. After listening to New Age teaching after New Age teaching, I have come to view life differently.

Now it is time for me to start living more fully in the world again. Getting over my fear that I will again be too slow at any job, or my ringing in my ears will make my training hard to hear. I am going to be applying for jobs that interest me. Now that my Blog is no longer connected to my name, I can still write about my Disability without fearing a potential employer uncovering it.

Yet, I want to go out into the world with a new energy force. The motivation to be driven by passion instead of stress. By finally making attempts to follow my bliss to the best of my ability, I hope this re-entry into the world of Independence will not result in a breakdown.

For the longest time, I did not know what I was living for. I had zero drive, and little motivation. I couldn’t do artwork. Yet, I have risen like the Phoenix.

A now wise Phoenix who knows it cannot stay outside of the world, but also not to make the mistake of letting Stress be ones motivation instead of passion. For after the old Phoenix burned, and the ashes were all that could be seen, the ashes were pulling energy from the ethers. First the pull was weak, and all it could manage was to watch a music video. Yet, slowly the Phoenix started pulling more of the essence of life. It read the vibratory words of Lightworkers, and listened to the teachings of Masters.

The wise Phoenix will follow its Passion of flying where the winds of excitement take it. For the moment that excitement was writing this post. Now the post is written… I need to find the next excitement to follow.

I was watching a Interview of Basher when inspiration struck… he was talking about telling the difference between excitement and nervousness. Here is the whole interview which covers many topics.